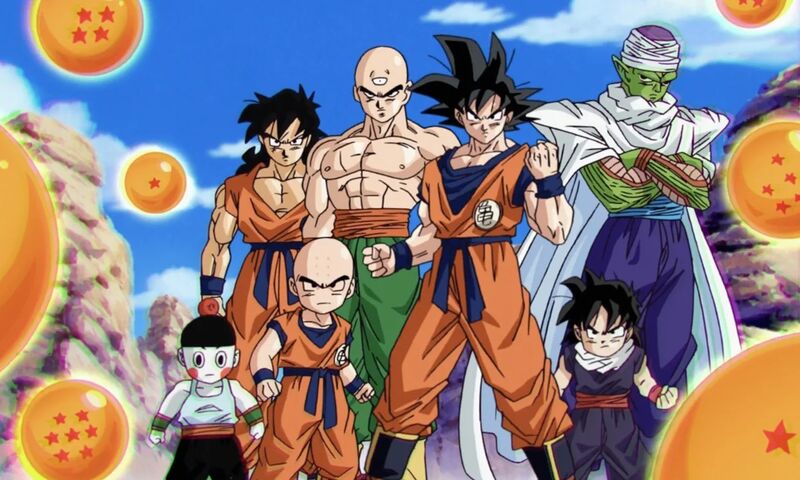 Thirst. We all have it. And we all seek out that thing that’s going to quench it. To say Dragon Ball Z presents us with some real thirsty moments would be an understatement. The beloved series finally made its way over to Crunchyroll on March 15, thanks to the Funimation merger and, now that we’ve had ample time to revisit season 1, it’s time to delve into the finer points of the thick thighs and sweaty guys that make up this feast. And we’re not just talking about chiseled abs and pulsing pecks. Oh no. Dragon Ball Z is like Baskin Robbins, 31 flavors of FINE. While your average list will examine “most memorable scenes”, or “heroic moments”, we’re here to give the people what they really want: where characters land on the thirst rankings. Be it your first time watching or a refresher course, we’re here to show you which characters are a nice appetizer, which are a three course meal, and which are just empty calories. Mild spoilers for season one. Now let’s break down these tasty cakes.

Goku, the main character. A beautifully sweet dumb boy, with a big heart and bigger pectoral muscles, Goku is determined to train and be the best, while also protecting his family and friends. And you know what? That kind of basic, naive heroic boy energy has a certain sexiness to it. Google “Is Goku a Himbo?” and you’ll find the answer to be a fairly consistent “yes”.  Not a lot going on here outside of good looks and big punches and there is nothing wrong with that. Though the question of whether or not he is a good dad is another matter entirely… Thirst Level 9/10

The man who never wanted to be a father, but fatherhood chose him (see: Goku who is, in fact, a very bad dad, so Piccolo had to pick up the slack). The man with a mysterious past. The man who was once a sworn enemy, but is now a trusted friend. We love an antihero, and Piccolo is one of the best. Something of a Wolverine type. A loner. Which of course makes him the perfect candidate to take on the training of a temporarily fatherless Gohan, a task he does not want to do! But excels at. Begrudgingly. Makes us love him more. If Mr. Miyagi was a bit meaner, a bit leaner, and a lot greener. 9/10

Goku’s best friend and training partner from the original Dragon Ball series. A short king. Krillin may not be the most powerful– seriously, every opponent he fights feels compelled to remind him of this–but he’s determined, and will always have your back. You got to love a loyal companion who always put in maximum effort. Thirst Level 7.5/10

This beautiful long haired dope. Thor is asking him for conditioning tips. A former martial artist/teenage bandit who suddenly pivoted to a career in professional baseball and is the best player on the team. It’s Gambit meets Ken from Street Fighter and Casey Jones all rolled into one. What more do you need? Constantly screwing things up with Bulma (don’t worry, we’ll get to her!) and making huge personal sacrifices. Plus he has scars. We dig scars here. And say what you will about Yamcha‘s much memed death pose–you know you’re checking out dat ass.  9.5/10

Look not everyone here is a lean mean fighting machine. Take, for example, Yajirobe: a thicc daddy who enjoys his meals and wants to survive. Coming through when he’s most needed, even if it takes some convincing. A man who likes to eat and wants to live to eat again? There’s satisfaction in that simplicity. This is a man who knows who he is and what he wants and we dig that kind of commitment. He loses some points due to the constant nose picking. Look we all do it, but subtly man! 6/10

Aaah, Tien Shinhan. Perhaps the most ripped and singularly dedicated to his own betterment of the group. This three eyed monk man is all about the concentration and training. When we meet him, he is literally stopping a waterfall. But he’s not stopping us from..well, you get it. Constantly shirtless. Always looking out for Chiaotzu. Continues fighting with just one arm. Which makes you wonder what else he could do with just one arm… All that said, he makes it pretty clear that he’s less-than interested in carnal desires. Would much rather train than bang. Which is totally cool, and we respect his boundaries. Even if Bad Launch maybe doesn’t. Still kind of a bummer and, for out personal taste, sadly, a buzz kill on the Thirst Levels. 7/10

Dirty minded old man, can’t keep his hands to himself, does not matter how jacked he is. Also talks loudly while in the bathroom. 2/10

A Zaddy all the way. All about making meals and checking in on his daughter. Dresses like a college professor or librarian, but with some little shorts and short shirtsleeves showing off those 80s wrestler ripped arms. Don’t let Ox-King‘s big smile, glasses and friendly beard fool you. This ox hunk will put you in a Kimura Submission. And you may just want him to. 8.5/10

Another big Zaddy, but seems too interested in laying down the law and not dealing with dead people’s bullshit. King of all ogres, judger of souls who makes the final call on whether they go to heaven or hell. Inflexible to the point that he has two ogre minions guarding a tree to make sure no one but him can eat the fruit off of it. Can’t build a relationship or the foundations of one here. His way or the highway, and that Snake Way is a long one. 3/10

Can’t stop making jokes, thinks he’s the funniest one in the room, even when something serious is going on. Also talks way too much about his car. Huge red flag unless you’re Dom Toretto or Speed Racer. 4/10

A snake woman, who wants to eat and digest you, but also she wants to feed you first? There’s probably folks who are into that! But let’s talk about her servants. Paid? Doubt it. Adequate breaks and killer benefits? Definitely not. Red flags a plenty. Plus she full on changes her appearance to that of a fetching blue skinned ginger to make an extremely false first impression. All good relationships need to start with trust and that’s not an option here. She will give you a hot bath, which is pretty good, until you realize it’s basically a stew base and actually part of her plan to cook and eat you. Ultimately? Right down the middle. 5/10

A woman with a spilt personality, so we’re ranking both. One, Good Launch, a blue-haired, very sweet, very confused young woman who likes to run around in the flowers, with a Disney’s Snow White-esque cadence (4/10)  and the other, Bad Launch a super violent blonde whose interests include robbing banks, rocket launchers and Tien, again, a man who has no time for love. Unclear whether she wants to kill him or kiss him. A little of both, probably. Violent, scary, big step on me mommy energy. 9/10

Do you have a cool friend? And he has an older brother who is kind of like your cool friend? But also a psycho who may want to kill you and destroy the planet? Well that’s Raditz. If Bill Paxton from Weird Science got super powers and tried to destroy everything including his brother. 4/10

Dude got them thick thighs and he’s not afraid to show them off. Just a big meaty man made of man meat. Attempts to kill a child, also a confirmed mass murderer of adult people. Hurts Nappa‘s ranking, big time. 4/10

This queen with her iconic, ever changing blue hair. There’s an episode of her in a tube top where Bulma and Krillin meet up with Yamcha and she leans against a light pole and let me tell you this woman is cut. Arms looking huge. She may not be out there fighting aliens, but girl is for sure hitting the gym. At the end of the season, she’s on an extraterrestrial ship running around looking like Ripley at the end of Alien, in a white tank and underwear, fully aware of, yet unfazed by, the fact that she forgot her pants. Nothing sexier than confidence and girl genius, Bulma Briefs, has it in spades. She makes her own clothes, invented the Dragon Radar, enjoys junk food and bossing people around. 10/10.

But Hey, You Forgot…

Now you’re probably wondering, “where are the rest?” Well they’re mostly children and animals which…no, just no. And we don’t talk about Mr. Popo. But there is the elephant in the room, or rather the hot tempered, spiky haired prince of all Saiyans in the room, Vegeta. Where is he in the thirst power ranking? Honestly, it’s difficult to judge. Remember, we’re specifically looking at the first season here, and long time Dragon Ball fans might forget that, we don’t actually get much Vegeta in season 1 (and yes we know Ox-King and Launch are only in the like one episode each, but they’re carryovers form Dragon Ball and have history). He’s a cold psychopath who turns into an ape, nearly kills the hero and then gets beaten up by a child and Yajirobe with Krillin jumping in on support. He’s more looming threat than personality. He spends most of the season sleeping or bossing Nappa around. Nothing wrong with a short bossy daddy, but hard to rank on that alone. So, given the limited evidence…inconclusive on Vegeta’s Thirst Level. Chi-Chi isn’t that heavily featured either. And we know we’ve got some real ringers waiting in the wings to make their future season appearances…

So the current, 100% supported by science, rankings at the end of season 1 are:

We know, we broke the hearts of many a Vegeta stan, and trust us, it hurt us as much as it hurts you not to include him. But hey, not to spoil future seasons or anything but, if you know, by our calculations, our angry little alien prince is going to do very well for himself.

FANDOM is the ultimate destination for celebrating your love of anime. Visit the link below for all of FANDOM's anime coverage!