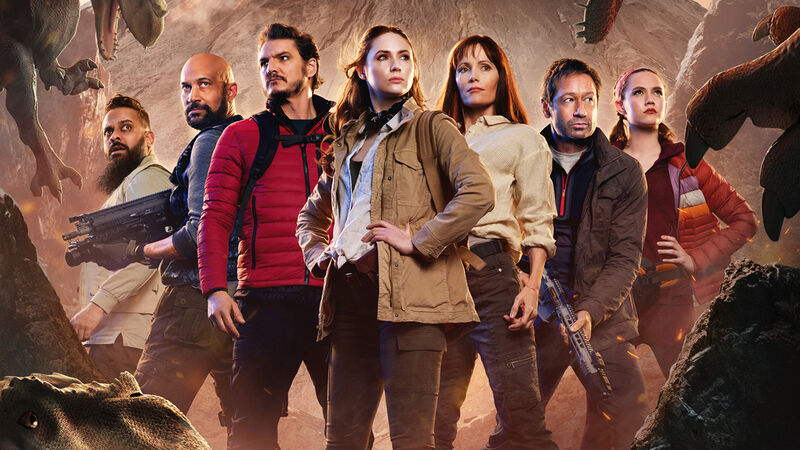 Early on in the pandemic, Judd Apatow took note of reports about the highly unusual scenario needed to complete Jurassic World: Dominion under these bizarre circumstances and how the production had been isolated in a “bubble” and essentially taken over a hotel to try and stop anyone from getting sick. With that in mind, along with other of the moment occurrences like the NBA’s own bubble, Apatow – whose hit films as a director, producer, or both includes The 40-Year-Old Virgin, Anchorman, Knocked Up, Bridesmaids, and many more – went to work on The Bubble, the new Netflix comedy film he co-wrote and directed, which debuts this week.

In The Bubble, the cast and crew of a film called Cliff Beasts 6 travel to England during the pandemic to make their big sequel in the midst of an isolated, stressful situation that only amplifies every bit of vanity and insecurity these Hollywood players bring with them. The cast includes Apatow’s wife and frequent collaborator, Leslie Mann, and their daughter, Iris Apatow, along with Karen Gillan, Pedro Pascal, Fred Armisen, David Duchovny, Keegan-Michael Key, Kate McKinnon, Peter Serafinowicz, Guz Khan, and Maria Bakalova (plus some very notable celebrity cameos).

Apatow spoke to Fandom about coming up with Cliff Beasts as the specific fictional series at the center of The Bubble, casting Gillan as his lead, and the ongoing question about whether comedies and other non-mega-franchise type films can once more be box office successes – and how The Bubble itself reflects this question.

As Apatow explained, telling the story of a big movie production was tricky considering he wanted to keep the actual, real life production relatively small and contained because of COVID – but that led him to decide he could reflect how many big movies are often made using a ton of post-production special effects.

Said Apatow, “One of the big drivers was how can I make a movie safely? I thought I could have everyone in a hotel, almost like a Christopher Guest movie, where you just get a bunch of funny people isolated under pressure. And if the movie can be contained, like it’s all shot green screen, then I can make a movie safely because it’s just two sets. And then it became clear that it should be some sort of monster and so we created flying Tyrannosaurus Rexes as the monster. It could have been a completely invented monster but I’m just not that smart at that. So they became Cliff Beasts.”

The Bubble’s existence was inspired by Jurassic World: Dominion’s production but in terms of comparisons between Jurassic World and Cliff Beasts, Apatow noted that in his mind, Cliff Beasts wouldn’t quite be at that level. “I thought a lot about Orca. You know, after Jaws came out, they did the copycat, Orca, with a killer whale. So I always thought [Cliff Beasts] was like the B-level action franchise.”

We quickly learn that Cliff Beasts 6 marks the return of Carol Cobb (Karen Gillan) to the franchise after she declined to make the fifth film, which has caused some animosity with her costars. When it came to creating the backstory both for the Cliff Beasts series itself and the story behind its creation, Apatow said, “I wrote the movie with Pam Brady, who co-wrote the South Park movie and did Lady Dynamite, and we just sat around and had to create the franchise, creator the actors and actresses who are in the franchise and their history with each other. Who gets along, who doesn’t get along? How do they treat Karen Gillan’s character? She’s the one who left, who thought she didn’t need it anymore. And now she’s coming back after making a terrible movie where she plays half Palestinian and half Israeli and then has to fight aliens. So we did create full backstories.”

On top of that, Apatow explained, “During the shoot, and I always like to do this, we shot material for a documentary on the making of our movie, The Bubble, but we also shot material which would be in a fake documentary of Cliff Beasts. So we would have the whole history of the franchise and whenever anyone wasn’t shooting, we would have a crew there. And they would do interviews and they’d say ‘Okay, am I in my character for Cliff Beasts or am I Fred Armisen?’

Though The Bubble is an ensemble, Carol is at its center and the character we enter the story through, as we follow her journey to the set of Cliff Beasts 6. At this point, Gillan is well known for roles in blockbuster series, including Jumanji’s Ruby Roundhouse and the MCU films’ Nebula, but The Bubble gives her the spotlight and marks her first time working with Apatow.

When it came to casting Gillan, Apatow said, “I knew I would need a lead character who was the way into the movie; the person who is talked into doing the movie by their agent who tells him how fun it will be to be in a bubble. And I thought that she would be the most grounded person surrounded by the crazy people. Jake Kasdan is a great friend of mine and we worked on Freaks and Geeks together and Walk Hard and Undeclared. He has just been talking for years about how Karen Gillan is the greatest. So when I called him and I said ‘Karen Gillan?’, he was like ‘That is the best idea ever.’ She’s very physical – that’s why she is an action star – but she’s also hysterical. And she’s very, very warm and likable, so that was one of the most enjoyable parts of making the movie was getting to work with Karen because she’s just in a great mood all day long. She’s very game and I really enjoyed putting her through her paces.”

While generally speaking, you might hope to work with people you like, Apatow said that was even more of a consideration during a pandemic, noting, “You’re definitely assemble a team that you want to be in a bubble with. If you’re making a movie about a bubble, we’re semi in our own bubble, and the first thing you think is everyone’s got to be cool. We don’t want anyone to make this a nightmare.”

The Bubble was produced before vaccines were available and Apatow observed, “It was weird to make a movie, especially at that time when the pandemic felt very, very dangerous. It’s weird to make a movie when you’re kind of scared all day long, on some level. And we are having the same conversations that are in the movie. In the movie, we’re making fun of the debate about ‘Do you even need a movie? Why would you make a movie right now? Who needs a sixth Cliff Beasts?’ But you could say the same thing about ‘Who needs The Bubble?’ And so there were all sorts of meta things happening all the time. We weren’t allowed to hang out with each other afterwards. We had very strict protocols, and thank God, no one got sick the entire movie, so the protocols worked.”

Apatow said the situation ended up naturally leading to a lot of introspection, recalling, “I guess on some level, we were trying to pay attention to what we were feeling in real life and instantly put it in the movie. And a lot of that is just what you do when you have a lot of free time to think about how you feel about your life. ‘Am I in the right job? Am I happy with my relationship?’ That’s why we have the great resignation right now. Because everyone was home and they said, ‘I hate my life. Is there a way to do this better?’ And that’s part of what we were satirizing – everyone’s attempt to continue working and how do we keep some semblance of our lives moving forward when there’s this giant cloud above us?”

Apatow has produced and/or directed some of the biggest hit comedy films of the past 20 years, but notably, The Bubble not only debuts as a Netflix movie but at a time when many are pondering if anything but giant, blockbuster films can get many people to the theater again.

Produced at a time when even some would-be blockbusters were being moved to streaming, The Bubble includes the characters – particularly Keegan-Michael Key’s Sean Knox – worrying about Cliff Beasts 6 suffering that fate and what that means for the public’s perception of them as movie stars.

There’s plenty of real life debate about the perception of Netflix movies and if they’re “real” movies in the way we’ve always thought of them but Apatow said when it came to those jokes in the script, “Netflix were game about all of it. I didn’t get a call about any of them. I thought it was funny to have a moment where you see Keegan’s character say, ‘But if it’s on TV, it’s not a movie. It’s a TV movie! It’s got to be in the theater. I’m not a TV star, I’m a movie star!’ And I bet you that’s what all of them are thinking. There’s no chance that every person that you’ve seen take a giant streaming movie didn’t have a moment where they talked to their agent and said, ‘What does this mean? Am I still a giant movie theater person if I do this?’

Apatow saw his movie The King of Staten Island moved from a theatrical release to a digital release early in the pandemic, amongst a slew of other films having this occur, but two years later, he feels there’s still hope for traditional comedies – ones without a huge special effect backdrop – to find an audience in theaters.

Said Apatow, “I’m producing the Billy Eichner gay romantic comedy Bros, which comes out in the fall. We’ve been testing it with full houses of people in theaters and it kills and it’s very moving. So I would hope that if people hear that there’s a film like that out there that they would think it would be worth getting off the couch and having the movie theater experience. Obviously, people love spectacle in a movie theater and that’s been happening for a long time. But when we have seen Bros with a crowd, it’s a real, collective emotional experience. People laugh together, they feel the romance of it, and it’s powerful. It’s not exactly what it’s like when you’re alone in your house.”

Apatow in fact said he very much kept in mind that The Bubble would debut on Netflix, explaining, “For this movie, I actually designed it to be for a person sitting alone in their house. Because when you make a comedy, sometimes you make it for the group momentum and that experience, but this I tried to edit and create more like an episode of The Simpsons and comedies that can have weird jokes and funny jokes that might not get a laugh in a theater, but maybe it’s your favorite joke in the movie because it’s just weird in the right way.”